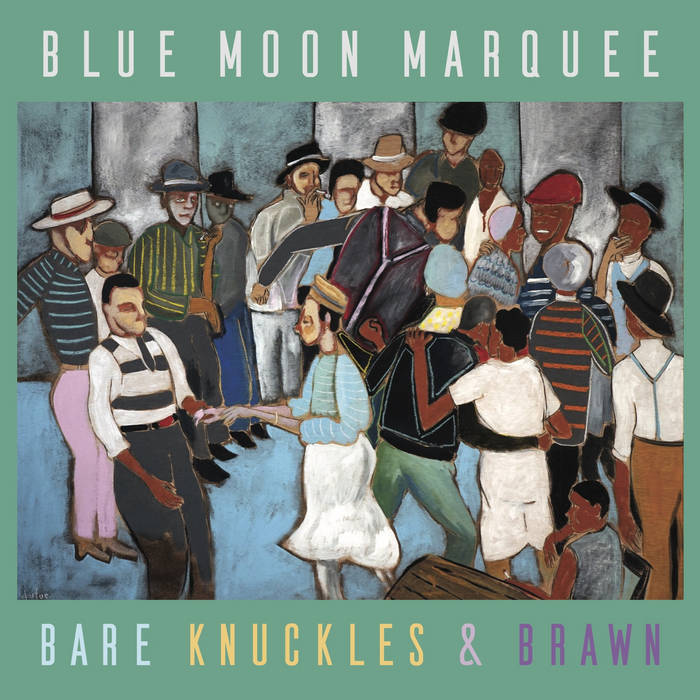 “This album to me represents a combination and evolution of our last records,” A.W. Cardinal says about Bare Knuckles & Brawn. “It is a fine example of what we sound like with a larger ensemble. The sound is a mixture of swing styles of music like blues and jazz, western swing and New Orleans. Think Django Reinhardt/Charlie Christian meets Tom Waits. I believe this album features some of our best-recorded work and we were able to do it with some of the best possible musicians.”

“We recorded this album in three days,” adds Jasmine Colette. “I like all the grit and pulp with my music, so the warm sound of the tape made it come together. All songs were written A.W. Cardinal and me in the last year of our travels, in relation to the air of the times, characters we meet, cities we walk in and the weather we feel.”

A little something about a few of the tunes:
“Big Black Mamba” - was inspired by the Native legend of the big black snake we pull from the ground (oil);
“Hard Times Hit Parade”- about the greed of the coin and trying to survive in the wealth gap;
“Lost and Wild” - sixties scoop;
“Big Smoke” – a song about climate change;
“As I Lay Dying” - deals with feminism and the fall of Patriarchy;
“52nd St. Strut” - for the love of Billie Holiday;
“High Noon” - is a reference to Black Elk, a holy man of the Oglala Lakota people and
the perseverance of Native Peoples.

Blue Moon Marquee currently makes their home in an island shack on the coast of the Salish Sea in British Columbia. A.W. Cardinal and Jasmine Colette (a.k.a. “Badlands Jass”) write and perform original compositions influenced by anything that swings, jumps or grooves. Influenced by early blues, swing, jazz and ragtime, artists such as Lonnie Johnson, Louis Armstrong, Blind Willie Jonson, Charley Patton, Howlin' Wolf, Screaming Jay Hawkins, Tom Waits, Memphis Minnie, and Django Reinhardt are deeply infused in the soul of their music.

Bare Knuckles & Brawn is a good representation of what they sound like with a larger ensemble. It is a mixture of blues, jazz, swing and New Orleans. Think Django Reinhardt and Charlie Christian meet Tom Waits. All tracks were recorded to 2-inch tape using vintage RCA microphones that give their sound its warm tone.

On live performances, the Blue Moon Marquee duo plays with the energy and sound of a full band. Jasmine Colette, the rhythm section, not only commands the upright bass but also brings the swing with her feet on the kick drum, snare and high hat, all while singing harmonies. A.W. Cardinal is of the screaming and hollering blues tradition, with distinctive thick and smoky vocals that barrel out like a raging bull. His guitar crackles with the swinging energy of jazz-tinged blues.

Touring throughout Canada, Europe and the USA for the last 5 years, Blue Moon Marquee just returned from their fifth European Tour, playing major Blues festivals in Belgium and Holland. Spanish Label FOLC Records are releasing the album in Europe. Appreciated for their authenticity, Blue Moon Marquee was nominated for Canada’s Maple Blues
Award as “best new artist of the year” in 2016. The duo was also the most-requested band for the 2016 and 2017 TD International Jazz Festival circuit across Canada and nominated for Indigenous Artist of the Year (2017), presented by Aboriginal Peoples Television Network (APTN). Their songs have a heavy dose of atmosphere and texture with a penchant for poetic characters and gritty settings. It is this connection to the working class that draws so many people to their music,

crossing many of the usual genre, age and cultural bounds. Most importantly, they make every song their own. After several years of playing together, the group has developed a distinct, personal voice that can be heard in each song. The result is an infectious mix with a contemporary and relevant feel, which is highly listenable and great for dancing. Blue Moon Marquee's passionate performances and smouldering onstage chemistry is their trademark, and the way Colette's tones lift A.W.'s mystique is something that enthrals audiences from back-room bars to festival stages, to velvet-seated theatres.

Bandcamp Daily  your guide to the world of Bandcamp

Featuring interviews with the mighty Haitus Kaiyote and genre-busting L'Rain.